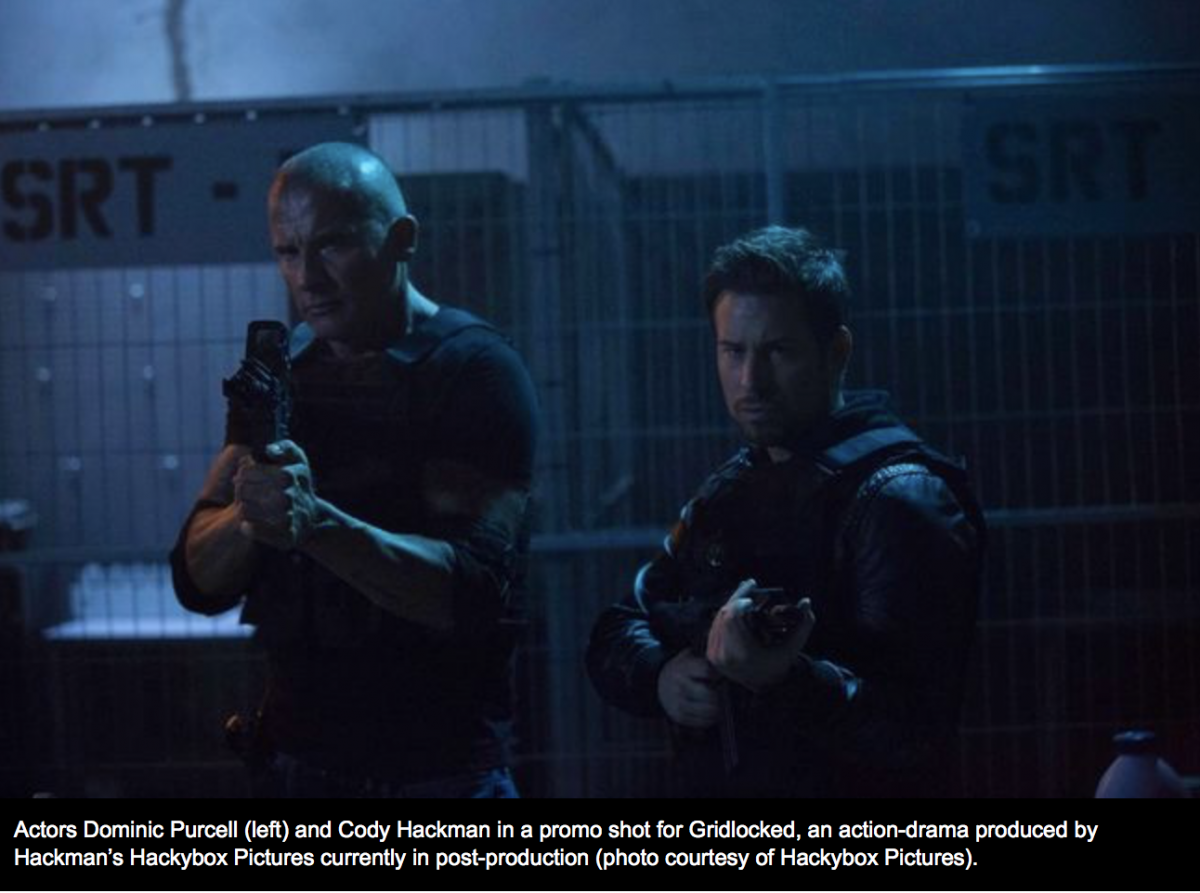 Gridlocked, a new Canadian action-drama from London-based producer and actor Cody Hackman, will be available on all major platforms and in retail stores across North America on June 14. Hackman stars alongside Dominic Purcell (Prison Break), Stephen Lang (Avatar), former WWE superstar Trish Stratus, Danny Glover (Lethal Weapon) and Vinnie Jones (Snatch) in the film, which is being released by Magnolia Pictures in the US and Mongrel Media in Canada. Co-written and directed by Toronto’s Allan Ungar (his second collaboration with Hackman), the throwback buddy cop movie is about a former SWAT leader (Purcell) who gets saddled with an obnoxious, hard-partying movie star (Hackman) after the latter’s legal troubles require him to perform community service. Their ride-along takes a serious turn, though, when they find themselves trapped in a police training facility under siege by a team of mercenaries. Filmed primarily in Toronto with a few shots from London, Gridlocked is in some ways an ode to the action movie boom of the eighties and nineties, a genre Hackman said he feels particularly comfortable in as an actor and a producer. “Because of my martial arts background, action movies are really making sense to me,” said Hackman, who recently rebranded his production company as North Hollywood Films and is following up his first release, the mixed martial arts-inspired Tapped. “The action genre, as a producer, … it’s still the number one global selling genre. Everyone understands action. They make the most money because they’re universal.” Hackman will be overseas in China when the film lands in North America. Gridlocked is being screened in Shanghai during Jackie Chan Action Movie Week, the only Canadian selection in its category, Hackman said. “We’re premiering next to Sicario and some huge releases, so we’re really, really hoping for a theatrical release in China because action movies are their thing,” Hackman said. Gridlocked has already had some success in the action genre festival scene. The film won the Best Action award at the 2015 Toronto After Dark Film Festival and screened at Fantastic Fest in Austin Texas, where Hackman and his colleagues were able to negotiate the film’s distribution deals. Although there are no plans for a theatrical release near London, Hackman said his company also has a global deal with Netflix to add Gridlocked to the popular movie streaming service closer to the end of summer. CMontanini@postmedia.com Twitter: @LondonerChris