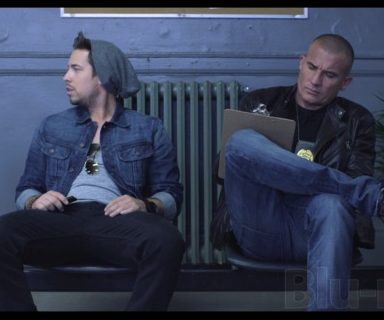 If you’re looking for a movie with hyper-violence, well-choreographed ass kickings, and a lot of bloodshed, Gridlocked is your Huckleberry. Not to be confused with the great 1997 crime film Gridlock’d starring Tim Roth and the late Tupac Shakur, Gridlocked is a hepped up Assault on Precinct 13 with bullets calling all the shots. In Gridlocked, Dominic Purcell (Prison Break) plays the hard-as-nails SWAT leader David Hendrix. He’s the guy you send into an apartment packed with guns and goons ready to fire them. He’s the guy who walks out of that situation with a lot of blood on his hands, and none of it is his own. (Move over Liam Neeson, there’s a new bad motherfucker in town with a particular set of skills.) Today is a special day for David — he gets to carry dead weight around, a former child actor-turned-trainwreck Brody Walker (Cody Hackman), who was just busted for another DWI and assaulting a cameraman, who’s no doubt a replica of one of those obnoxious, invasive, and repulsive TMZ camera guys who love to taunt celebrities. Walker is a spoiled brat with redeeming qualities inside him, somewhere, just too wrapped in the golden celebrity lifestyle and needs a good reality check. To avoid jail time, he is ordered to ride around with a cop as community service, and that cop, much to his disapproval and irritation, is David. When they stop by a training facility, their budding romance is put on hold when a team of mercenaries take over looking for something called a lot of money. They lock down the facility and plan to take out everyone inside it and get what they came for. Mayhem ensues. Gridlocked roams familiar territory. It’s undoubtedly influenced by John Carpenter’s Assault on Precinct 13, Martin Brest’s Midnight Run, and Walter Hill’s 48 Hrs. Paying homage to renowned films like this will never be a wrong move. The motive is simple but always complicated and a riot to watch: the hero must keep safe and put up with the zero, and this always makes for satisfying entertainment. Gridlocked is an energetic beast and doesn’t waste any time with the mayhem. The first fight scene is one of the best to come along in a while. The film has enough bone-crunching fight scenes and bullets to the head to satisfy any movie buff. If David Hendrix isn’t going to survive this night, he’s made it clear he’s going down in a blaze of glory. Something else to note: it’s also at times amusing, something a lot of action movies have forgotten about these days. Gridlocked is Allan Ungar’s sophomore feature and he shows promise as an action director. He is someone to keep on your radar. For Gridlocked, Ungar is a triple threat, serving as director, co-writer, and editor. So this film is all his vision. Since anyone with an admiration of action films will quickly pick up all the films Ungar is paying tribute to, he ups the chaos and carnage to keep the entertainment flowing, and audience satisfied. Gridlocked has an excellent cast alongside the aforementioned: Danny Glover (who finally looks too old for this shit), former WWE superstar-turned-actor Trish Stratus, and Stephen Lang (Avatar) as, appropriately, the bad guy. Vinnie Jones (Guy Ritchie’s Snatch and Lock, Stock and Two Smoking Barrels) shows up for a quick hello and blast to the face. Poor guy, he gave up football (or soccer, if you’re American) for acting and could have been the next great loose cannon action hero if he didn’t take every damn movie script that came his way. As a film, Gridlocked is a rollicking blast. It brings the pain and something a lot of action movies are missing these days: fun. It doesn’t take itself too seriously, just wants its audience to sit back, relax, and enjoy the body count. Worked for me.