Having successfully conquered Canada with a pair of blockbuster world premieres in London, Ontario and Toronto last month and Brazil with a theatrical release this past Friday, Tapped Out is ready to take on the American market. The Karate-Kid-meets-MMA flick, featuring appearances by UFC legends Lyoto Machida and Anderson Silva, will be released Stateside on DVD, VOD, and PPV on Tuesday, May 27. As I wrote when I covered the Toronto premiere, Tapped Out is a slightly cheesy but thoroughly charming contribution to the fledgling MMA film genre, skillfully blending the best of classic combat movies like the aforementioned Karate Kid and Rocky with both the moves and culture of Ultimate Fighting in a way that we haven’t necessarily seen before. It works because the people who made it and the people who starred in it genuinely—and often geekily—care about martial arts of all kinds, and want to do right by the films they grew up with and by the sport the currently enjoy and participate in. I got a taste of this when I sat down to talk to Cody Hackman, the five-time Karate World Champion-turned-actor and writer who plays Michael Shaw, a troubled young karate practitioner who joins an underground MMA league to avenge his dead parents, and Krzysztof Soszynski, UFC Light Heavyweight-turned actor (and behind the scenes UFC guy) who plays the villain before the screening. Both were incredibly thoughtful about the way that MMA is currently portrayed in pop culture, and excited to talk about how their film hopes to improve on that. And they were equally happy to get a little sidetracked about the superiority of Shotokan Karate and their training regimens. Here are some of the highlights of that chat. Fightland: Cody, you co-wrote the screenplay for Tapped Out. Was the story your idea as well? Cody: It was mine and Allan Ungar’s. I added the authenticity of the Karate aspect of it, just different terms and that type of stuff. But we were both inspired by other movies, Karate Kid, Rocky, that type of stuff. And these movies are done over and over and over again, but I think that we did a good job of remaking them in a modern sense. It’s Karate Kid meets MMA. In the cage. What was your background and familiarity with MMA before this project? Cody: I was actually a Karate guy. I share the same style as Lyoto Machida, Shotokan Karate. I was a five-time karate world champion in the same style. Our style’s a lot of sticking and moving, darting in and darting out, punching at different angles.  I’ve had my hand in MMA. I’ve won a couple of fights, I’ve lost a fight. And I love it. I’m a huge, huge fan of the sport. It’s the fastest growing sport in the world. It’s huge right now. So mixing that nineties or eighties Karate Kid stuff with the new stuff… it’s awesome. It is interesting that the fight films you bring up are from more traditional combat sports. I feel like the representation of MMA in film is still in its infancy. Cody: It’s new. It’s new. Krzysztof: Absolutely. There’s only been maybe four films done in that style. But, like Cody said, it is the most popular, probably the fastest growing sport on the planet right now and if you do a Karate Kid movie the old style way, people are not going to be into it as much. They want to see what’s new, what’s out there out there and I think MMA is that new sport where everybody’s kind of transitioning into that. You see a lot more MMA movies nowadays. You see a lot more action movies adding that element to it, whether it’s jiu jitsu, whether it’s wrestling… C: Knees or just, like, different technique. K: Or Muay Thai style. You don’t see just the wrist controls and the Hapkido and Aikido stuff. It’s more and more MMA style now. That’s kind of happening left and right in movies now. We’re transitioning into a new world. 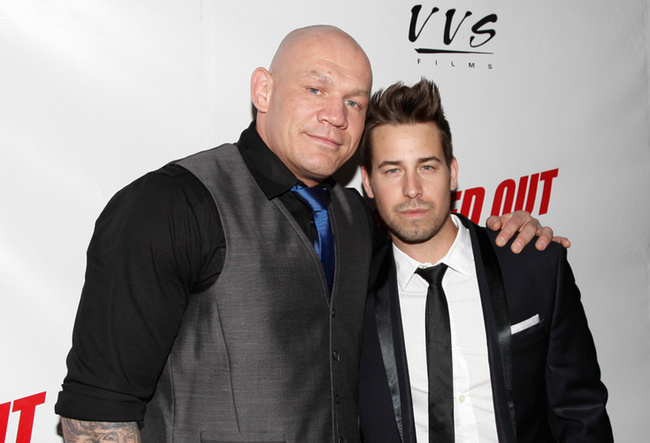